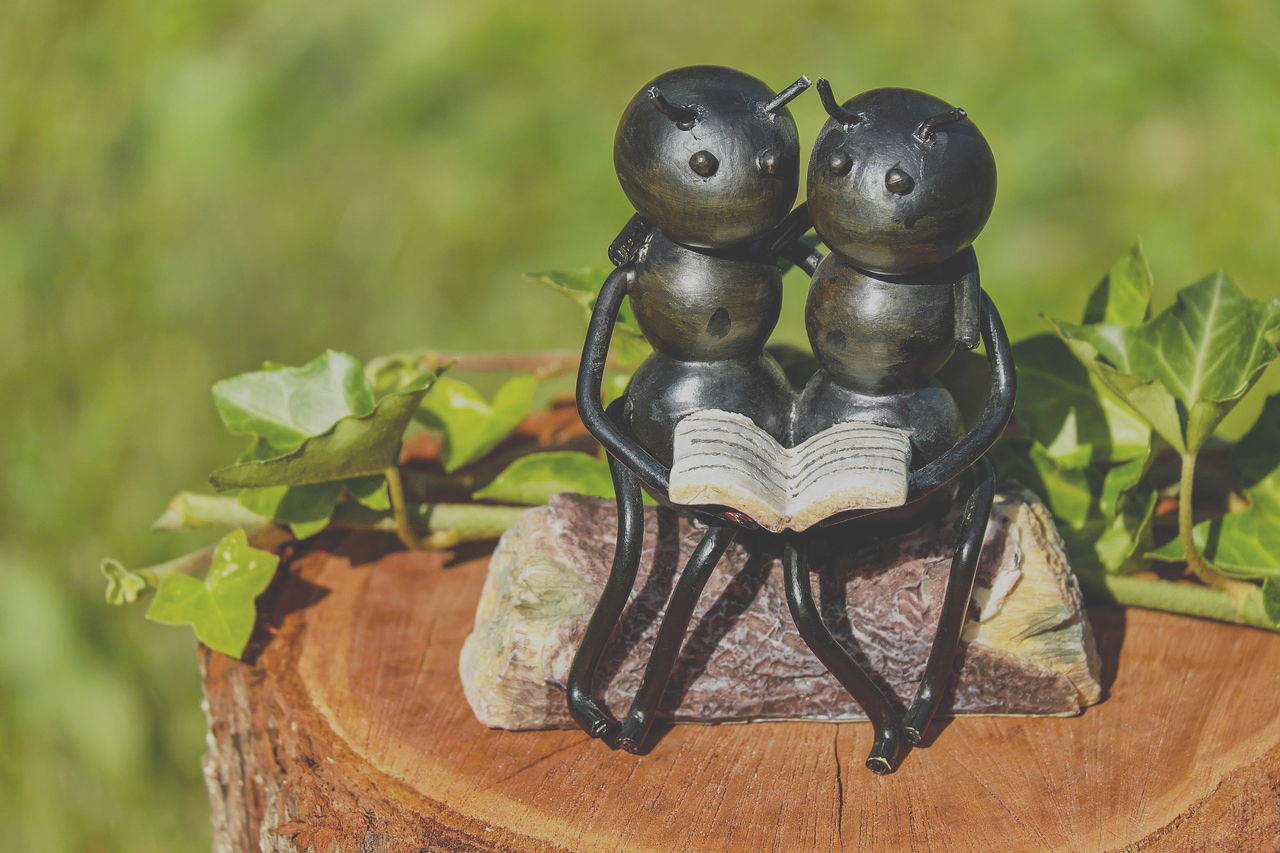 Work, Pray & Watch along the Way:
Big Lessons From Little Creatures
Neil Vimalkumar Boniface
ANTS DO TOMORROW’S WORK.
THEY ARE FUTURE-READY. ARE WE?

Francis Bacon said: ‘God speaks through two books; nature and Scripture’. In this article, we look at some small creatures in God’s grand universe.

Proverbs 6: 6-11 reads:
“Go to the ant, you sluggard;
consider its ways and be wise!
It has no commander,
no overseer or ruler,
yet it stores its provisions in summer
and gathers its food at harvest”.

Team Work
Without a leader, ants organize themselves very well. In fact, ants are called ‘eusocial’; meaning they show a very advanced social organization. Talking about ant collaboration – army ants can make a living bridge. Some ants hang on to each other while others crawl over them, which shows astonishing coordination. Did you know that the army ant makes a nest entirely of ants themselves – called a bivouac[1]. There is rest found within the team after work.

‘Tomorrow’ Work
Ants are known to store their food. Inside an anthill, there is the food chamber, the larvae chamber, waste chamber etc. They are future-ready.

Hard Work
Solomon contrasts the lazy person with a hard-working ant. An Army ant could march for 15 days at a stretch.

Smart Work
Did you know that a honey bee flaps its wings 230 times in just a second? To produce one kilogram of honey, bees fly the equivalent of three times around the world. No wonder, we call them busy bees.

But, bees are not always busy and are known to sleep for 5 to 8 hours a day. So, they do have a good work-life balance! Biologists are also convinced of basic dreaming in honeybees. Bees show remarkable communication abilities – a ‘waggle dance’ across the honeycomb indicates the direction and distance of a rich source of pollen and nectar. Looking at its intricate behaviour, some experts think honeybees have unique personalities.

Jesus said: “You are worth more than many sparrows”, (Luke 12: 7) affirming the unique stamp on us as individuals. Psalm 139 reads:

We have unique thumbprints and tongue-prints, not considering the intricate iris patterns in the eye? So much differentiation in such a small space among a few billion people. Doesn’t that suggest that what we do and what we say, should be authentic and not just a run-of-the-mill job?

“Oh yes, you shaped me first inside, then out;
you formed me in my mother’s womb.
… You know exactly how I was made, bit by bit,
how I was sculpted from nothing into something”.

We have unique thumbprints and tongue-prints, not considering the intricate iris patterns in the eye? So much differentiation in such a small space among a few billion people. Doesn’t that suggest that what we do and what we say, should be authentic and not just a run-of-the-mill job? Os Guinness distinguishes between primary calling, which is common to all followers of Christ, and secondary callings that characterize our specific roles and vocational responsibilities. Smart work is ‘minding our own business’.

Good Work
Fireflies are such a marvel to look at. They belong to the Lampyridae family, root word meaning – ‘to shine’.

The insects take in oxygen and, inside special cells, combine it with a substance called luciferin (the root word common to Lucifer, meaning light-bringing morning star) to produce light with almost no heat. This feature is called ‘bioluminescence’.

Jesus said, “You are the light of the world… let your light shine before others, that they may see your good deeds and glorify your Father in heaven”. (Matthew 5: 14-16)

Obviously, we are not expected to develop bio-luminescence, but to do ‘good works’.  It is time to ‘Rise & Shine’.

When a praying mantis is waiting for its prey, it keeps its front legs upright and appears to be folded in prayer. But that angelic pose is just an advantageous stance, well poised for the attack. No wonder someone said – this brutal insect should be called – preying mantis and not praying mantis!

While posture in prayer is crucial for us, the attitude of the heart is of paramount importance. Jesus came down heavily on a mere outward religiosity. Jesus taught His disciples to pray – ‘Thy will be done’.

While posture in prayer is crucial for us, the attitude of the heart is of paramount importance. Jesus came down heavily on a mere outward religiosity. Jesus taught His disciples to pray – ‘Thy will be done’. His own prayers were for the sake of others. Do our prayers represent self-seeking indulgences (like the mantis) or a care and concern for others?

A Monarch butterfly migrates 3000 miles across North America. This is one of the greatest natural wonders of the world, as unlike birds or wildebeest migration, these individual butterflies will never return to their base.

How does this colourful insect travel 2 months all the way Mexico? Even more surprising is that a few generations later, the cycle repeats. It is the 4th generation of butterflies that migrate and they live 6 to 8 months unlike the rest of them which live for just 2 to 6 weeks.

We are pilgrims and travellers in God’s grand story. It is a call to sharpen our homing instincts and develop our spiritual muscles for the tasks along the way.

These butterflies have two control mechanisms that help keep them on track – timekeeping “clock” neurons in their antennae and azimuth neurons in their eyes. These monitor the angle of the sun that is crucial to pace their trek. The biology of this butterfly is indeed intriguing. One cannot miss, God asking Job:  “Does the hawk take flight by your (human) wisdom and spread its wings toward the south?” (Job 39: 26). We are pilgrims and travellers in God’s grand story. It is a call to sharpen our homing instincts and develop our spiritual muscles for the tasks along the way.

The moth and the star
The moth has a natural tendency to be drawn to a light source. This is called transverse orientation – an attraction to a distant light source like the star. However, with the arrival of artificial light, the moth finds itself in a quandary. Unnatural light sources throw off their internal navigation systems, and they zoom towards dangerous light sources – like floodlit lamps – which destroy them completely.

This explains the source of the phrase – ‘Like a moth to a flame’ which is used to describe their seeming self-destructive behaviour.

Alister McGrath, in Glimpsing the Face of God, sees a parallel between the moth and its attraction to the star, and human pursuits. “Suppose the deep sense of yearning for something that really satisfies us is actually a longing for God… might not this longing accidentally become attached to lesser gods within this world? … But suppose that these objects are like the candle to the moth – something which is only an image of our true desire? Might there be something, which is what we really are meant to desire, that will not destroy us but bring us fulfilment and joy? … It may seem to us that we are engaged on a quest for meaning and truth; in fact, the truth is engaged on a quest for us and has drawn close to us”.

My 9-year old son did a drawing of this – the moth, streetlight, and the star. But, this was no ordinary star, but the star that showed up at the first Christmas. It is one thing to seek after God, and quite another for God to pursue us.

Let’s respond to the Light of the World with Henry Newman’s words:

“Lead, kindly light, amid the encircling gloom,
The night is dark, and I am far from home;
Keep thou my feet; I do not ask to see
The distant scene: one step enough for me”.

Thanks to the little creatures that have given us big lessons on life. May this station of lockdown prepare us for the journey ahead.

Neil Vimalkumar Boniface is Speaker and Trainer with RZIM, India.
Drawings are done by Ivan Boniface. He is in class IV